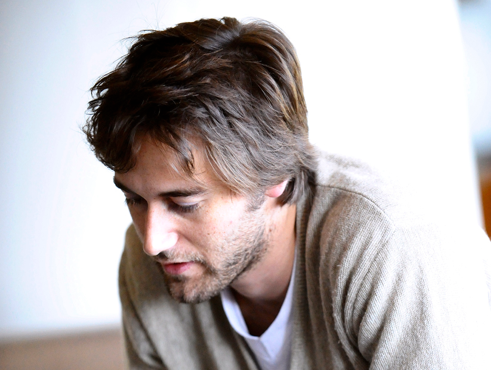 Viewers might have seen him on HBO’s “Entourage” or making guest appearances on ABC’s “Brothers & Sisters,” but since having little spots here and there two years ago, 24-year-old actor Ryan Eggold has gone from zero to 60 in a matter of years.

Eggold, who graduated from the University of Southern California in 2006, scored a role on FX’s now defunct tabloid drama “Dirt” last year, and is now starring on one of America’s most hyped new TV shows— the new “90210” on The CW.

Eggold plays Ryan Matthews, a teacher lost in the glitzy world that is the highly-coveted ZIP code. Although Matthews teaches at West Beverly Hills High, Eggold said he hopes his character’s outside perspective can be the vessel to let the viewers into the 90210-world.

The Chronicle sat down with Eggold last week in the lobby of the W. Hotel, 644 N. Lake Shore Drive, a day before going back to set, to discuss his career, “90210” and to get the scoop on what’s next for the up-and-coming actor.

The Chronicle: What attracted you to the role of Ryan Matthews on the new ‘90210’?

Ryan Eggold: I liked the idea of playing the outsider, someone who is in Beverly Hills, who is not from Beverly Hills, who is completely, totally opposed to its characteristics. He’s kind of a way in for the audience because he provides commentary on everything. He’s constantly calling people out.

Were there any teachers from your education you’re drawing from for this role?

Yes and no. There is no specific teacher that I’m drawing from, but obviously I’m drawing from every teacher I’ve ever had. There are performances and other things that I draw from a little bit [such as] Robert Downey Jr. in “Ally McBeal,” I really like that character. That came to mind. Some Matthew Perry stuff. There’s no one teacher. A lot of my drama teachers, because a lot of drama teachers are a little more kookier than the average teacher, they’ve definitely inspired me.

You weren’t really a fan of the original show growing up?

It’s not that I wasn’t a fan or disliked it, it was I [just] was a bit young. I remember watching it. I was 6 [years old] when the show started. I was too young to get it. I remember watching an episode after coming home from school and having no idea what they were talking about or what was going on when they’d be drinking or talking about sex. I’d be like,”I don’t know what any of this means, give me cartoons!”

What character(s) from the original series would you like to see make an appearance on the new show?

Your character is rumored to have a dark past that viewers have yet to see. What can they expect? Does it have anything to do with the new Kimberly character debuting in October?

My dark past does not have to do with Kimberly. His past has to do with where he comes from, and who he was when he was a kid. He was a bit of a wild child and bought into some things he shouldn’t have and overdid it. Some of those things will come to life, and some of the characters and troubles from his past will come back. He has trouble with his family, as he’s kind of the black sheep. It’s the kind of thing where everybody went into the family law firm, but my character went the other way. There’s a lot of resentment there, and all that stuff will come out.

In some of the shows you’ve done like ‘Dirt’ and now, ‘90210,’ it seems you’re steering toward roles that have to do with Hollywood, are you attracted to these roles or is it just coincidence?

I am not drawn to anything Hollywood, quite the opposite. This has been an amazing breath of fresh air. I love getting out of LA. I’ve never been to Chicago before, so this is amazing. I’m definitely not drawn to roles that have a Hollywood “thing”. I think they’re making a lot of shows about that these days, with “Entourage,” “Dirt” and “The O.C.” “Gossip Girl” is similar, but on the East Coast. For some reason, there are a lot of shows about high-echelon status. I don’t know why that is.

You were cast at 8 p.m. the night before you shot your first scene for ‘Dirt.’ What was that like?

It was insane! I auditioned, then I did a callback and did a chemistry read with Alex Breckenridge. It went really well, and then I never heard anything so I was like, “Well, that’s that. I didn’t get it.” Then they called the day before and said, “You work tomorrow.’” I showed up on set and was like “What the hell? Why did you do that?” And they just worked very last minute on that set. That was a great set with a great group of people. I made a lot of friends there. I wish the show was still going.

What was it like to work alongside Courteney Cox on ‘Dirt’?

Awesome. It was very intimidating the first couple of days because she’s a star. That was like my first show, really. I had done guest stars and whatnot before, but that was my first bigger job. The first day, I got a call at 8 p.m., the following morning at 6 a.m., I’m suddenly doing a scene with Courteney Cox and I hadn’t had time to even shake her hand, let alone act with [me]. She was fantastic. She’s a very supportive person, and people don’t realize it. She made me feel at home. A week or two later she said, “I can’t believe you weren’t nervous going onto the show,” and I was like, “I was terrified. I just didn’t let you know.”

OK! Magazine reported you were happy to hear Jennifer Aniston thought you were cute after she visited the set of ‘Dirt.’ Is there anything happening there?

We are getting married! No, but it would be awesome if something were happening there. I didn’t have the balls to ask her out because she’s Jennifer Aniston for God’s sake. I would just rather live in a happy world of Jen thinking I’m cute. That’s how it’s going to stay in my mind—perfect. Because then I’d be like, “Hey Jen, do you want to grab coffee?” and she’d be like, “Ew, no! I just though you were cute,”and slap me or something.

What do you attribute to your fast-paced success?

I would say I knew I wanted to act for a while, since I was 13 or 14. I’ve always taken it very seriously. It seems funny for an actor on “90210” to say I take acting seriously, but I always wanted to take it seriously. I have no interest in being a celebrity, but if that happens—great. There’s a difference between being a celebrity and having notoriety for your work. I think honestly [just]hard work.

Are you OK with people approaching you on the street after recognizing you?

Yeah, that’s totally fine. If you’re a fan of the show or something, I’m all about that.

So you don’t want to be on PerezHilton.com?

Oddly enough, I’ve actually met him, and he’s actually a nice guy. I don’t want to seek it out. I’ve seen actors seek paparazzi; they want to be photographed with whoever they’re dating, they want that story of how they got drunk, or whatever. I have no desire for any of that stuff.

In your spare time you dabble in music and have a band, what’s the scoop?

I had a band. That band is now gone because our drummer was an actor and he was doing stuff and I was doing “Dirt.” Our lead singer started working on another project. I got ProTools, a drum set, a guitar, a piano, a nice mini-setup, and I’m recording some of my own music now. It’s something I’d like to put out there sometime when I’m ready, which might be never. It all comes from the same place, acting or music. I like to write, as well. It all just comes out. One of these days, I’ll put some music out there. I really think it’s good. It takes a lot of cues form older music. The music out there today is just flat. A lot of it has the point of making money, so they’re catering to a particular taste.

There’s been a lot of hype around Jennie Garth and Shannen Doherty returning to the set and their troubled past. What’s been some of the weirdest things or funniest things that have happened on the set?

I like drawing penises on [Dustin Milligan’s] car when it gets dirty. That’s one of my favorite pastimes. He has to drive around all day with this giant penis on the back of his car and he looks like an idiot. It’s great! This is gross, but I think someone took a huge dump in Michael Steger’s trailer just to stink it up, and Steger was pissed. It was all in good fun. Rob Estes has slapped quite a few butts on set. That’s been interesting. He has a calendar on his desk on set; it’s a prop, his planner as the principal. The things he’s written on there have been hilarious, like “Fire the janitor today.”

Has playing the role of a tabloid reporter on ‘Dirt’ changed your view of them or the paparazzi?

Tremendously, because particularly working on ‘Dirt’ and being an actor whose status is starting to grow and be involved with that stuff a little bit, both of those things simultaneously are educational. I’ve discovered that that stuff is really to avoid it. The people who are constantly in those magazines and paparazzi pictures are asking for it a little bit. If you don’t want to be a part of it, you really don’t have to. Obviously you want to do press and support your show or film, but it’s easy to avoid that stuff. People where celebrity is a priority for them, those are the people that end up surrounded by paparazzi.

What’s the last thing you listened to on your iPod?

It’s all Ryan Adams all the time these days. The last thing I listened to was “The Sun Also Sets” off Easy Tiger, the new album.

I’m so boring! I have no guilty pleasures.